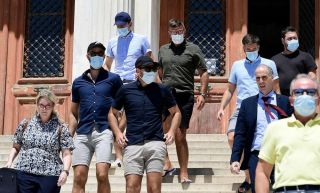 Some shocking details which led to the arrest of Manchester United captain Harry Maguire in the early hours of Friday morning in Mykonos, Greece have emerged as it is reported his 19-year-old sister was stabbed in the arm.

It was originally reported by Greek outlet Protothema that the 27-year-old defender had been arrested in Mykonos whilst on his summer holiday after a brawl broke out between tourists and he allegedly hit a Greek police officer early on Friday morning.

The English defender was released from court earlier today and is believed to be free to return to the United Kingdom.

The latest in the ongoing news surrounding the defender’s arrest comes from Mykonos Voice who claim that the Englishman’s young sister Daisy Maguire was stabbed in the arm by rival fans.

As quoted by Daily Star, the report states that Maguire engaged in a physical fight with another set of tourists after he became aware that his sibling was bleeding from arm after being stabbed with a ‘sharp object’.

United’s captain is now understood to be free to return to the UK and will undoubtedly be keen to join back up with his team-mates and put this week’s events behind him as he seeks to starts United’s 2020-21 campaign on 19th Sept.