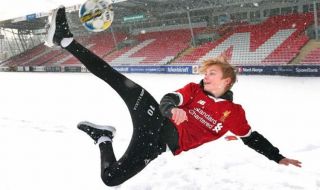 Hansen-Aaroen will join the club’s academy set up once he turns 16, which happens to be tomorrow (Aug 22). He is a creative midfielder and is expected to join United’s U-18 team.

The move was first confirmed a year ago, as per Manchester Evening News, and United sent Aidan Barlow on loan in return as part of the agreement.

“From Fløya to TIL rejuvenated, into the academy as a 10-year-old, replenishment at the TIL school and debut for the first team as a 15-year-old. Assist in his last match for Tromsø IL, this time.

“Thank you so much for the last ten years and good luck in Manchester United and on in your career. We hope you have a great time, see you soon.”

Hansen-Aaroen became the club’s youngest ever place when he made his debut for Tromso at the start of July. He made seven appearances for the first team, all as a substitute, providing an assist in his final game.

Speaking to Nordlys last week, Tromso assistant coach Lars Petter Andressen said: “We wish he could be here and contribute to the season, but we understand that they want him there.”

A big congratulations to Hansen-Aaroen on his move to United and becoming the first Norwegian player signed by Solskjaer since he took over as first team manager.