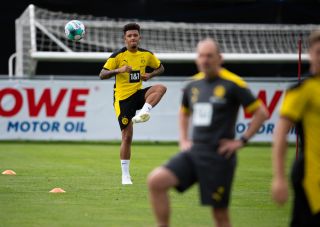 Borussia Dortmund players are understood to be ‘convinced’ that Jadon Sancho will be staying with the Bundesliga club next season, despite Manchester United’s well documented pursuit to sign him.

It’s a concern that United are struggling to get a deal over the line for a player they’ve wanted for at least the last year. The narrative was sold that a deal hung on whether the Reds secured Champions League football, but that’s gone very quiet since Ole Gunnar Solskjaer’s side finished third in the Premier League.

There appears to be an issue with the transfer fee. Dortmund don’t want to face up to reality that the transfer market will take a hit as a result of the COVID-19 pandemic, with United viewing their stance as unreasonable, as per Manchester Evening News.

One way a deal could be struck is if the player hands in a transfer request and makes it crystal clear he wants to leave Borussia Dortmund. Such a move would put United on the front foot in negotiations, but the Telegraph reports that Sancho’s team-mates are ‘convinced’ he will be staying put as a result of his major role in pre-season sessions.

Dortmund’s squad flew to a training camp in Switzerland on 10 August — an apparent deadline they gave United to strike a deal for Sancho, deemed ‘artificial’ by the Reds. If they truly meant that surely talks would be dead and buried by now (Aug 21)?

This summer is United’s chance to sign Sancho and it looks like it could be a wasted opportunity.

Next year Real Madrid or Barcelona could be interested, whereas this summer it’s a one-horse race! A complete shambles if that one horse falls at the last hurdle.