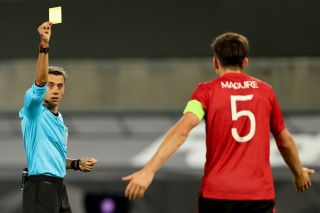 Manchester United say captain Harry Maguire is “fully cooperating” with Greek authorities after reports he was arrested on the island of Mykonos.

Local media are reporting the England international was arrested following an alleged fight on Thursday night.

Greek outlet Protothema claims that Maguire and his friends were involved in a fight with other Englishmen outside a bar in the area.

It’s added that the defender was handcuffed by police and he was one of three who were taken to the police station where more trouble allegedly kicked off.

“The club is aware of an alleged incident involving Harry Maguire in Mykonos last night,” a United spokesperson said via Sky News.

“Contact has been made with Harry, and he is fully co-operating with the Greek authorities.

“At this time we will be making no further comment.”

Harry Maguire was arrested in the early hours of Friday morning after a fight between his friends and other Englishmen outside a bar in Mykonos, Greece #mulive [@protothema]

Maguire is not a troublemaker and I’m not going to pretend to be outraged by something the public knows very little about.

These things happen and we see footballers get an extra hard time for it.

As captain of the biggest club in the world, Maguire knows he has a responsibility to carry himself as a professional. I’ve no doubt he’ll wake up disappointed by what happened but we’re not going to lose any sleep over it.

Enjoy the rest of your holiday and stay out of trouble, Harry!