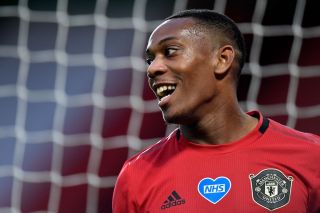 It wasn’t so long ago that Anthony Martial cut a frustrated figure at Manchester United – a player with all the ability not matched by his attitude and mentality. Indeed, had Jose Mourinho had his way, the enigmatic Frenchman would have been out of the door, possibly to Chelsea in a swap deal for Willian.

Martial was undoubtedly the most frustrating, infuriating player at the club. A man blessed with pace, trickery and an eye for goal, he seemed to be in a permanent sulk and would turn up only when the mood took him. For every two match-winning performances, there would be ten where Martial would fade to the fringes of anonymity. It was clear he did not see eye to eye with the former United manager – he was probably too creative for Mourinho’s liking. You knew Martial had the talent, but he needed to focus, find consistency and get his pecker up a bit.

With Mourinho but a distant memory and Ole at the wheel, Martial is a different animal now. Maybe it’s because he got his old number nine back, he was given a definitive role within the team and the promise of being Ole Gunnar Solskjaer’s main striker in a team that played to his considerable strengths when Romelu Lukaku was sold. Whatever the reasons, the mercurial Martial has had the season of his life at United. A player transformed by the tutelage of the former United-striker-turned-manager, I’ve never seen the Frenchman play with a smile on his face like he has done this season.

Not only has Martial had his best scoring season at Old Trafford, ending a prolific campaign with 23 goals, but he’s developed into a complete number nine.  No longer simply a goalscorer, Martial’s work rate has improved hugely; his hold up and link play has allowed the other attackers to thrive and – whilst still mercurial – he no longer gets frustrated when he drifts out of a game from time to time. He’s willing to put a shift in and sacrifice himself for the likes of Bruno Fernandes, Mason Greenwood and Marcus Rashford, something he never would have done before.

23 goals in all competitions (with 17 of those in the league) and 12 assists in 47 games with no penalties and the likes of Andreas Pereira and Jesse Lingard to work with for half the season until the arrival of Fernandes. Even before the signing of our Portuguese magnifico, Martial was still in impressive eye-catching form. All this despite having missed two months of the season through injury – he surely would have hit 30 goals if not for that lay off. He finished as our top scorer for the first time since his debut campaign, one ahead of 22-goal Marcus Rashford. It is for these reasons that Martial gets my vote as United’s Player of the Season. For context, Sergio Aguero hit the same in all competitions, as did Mo Salah and Golden Boot winner Jamie Vardy.

There have been a number of other impressive performances.  Fernandes almost single handedly transformed United from also rans to a Champions League team, but he arrived in January and it seems churlish to give our Player of the Season to someone only here for half of it, no matter how good he has been. Aaron Wan-Bissaka had a brilliant debut campaign and Fred was a contender until Paul Pogba returned from injury. Greenwood had a stunning breakthrough campaign and will only continue to get better.

But for me, Martial’s status as top scorer and our most improved player gives him the edge. Whilst not in the world class bracket quite yet, there have been stellar performances from the Frenchman in this season like no other. He became the first Red to score a league hat-trick since Robin Van Persie seven years hence, with a treble against Sheffield United that featured a filthy lob over the ‘keeper to complete the feat. He’s the first man to score in both league derby games since a certain Cristiano Ronaldo in 2006-07. The Europa League tie with Copenhagen was Martial at his brilliant best. Anonymous for much of the match, he won the penalty and sent the Danes back to their homeland with a filthy piece of skill, almost scoring a ridiculous goal at the death. Even when not at his best, he can explode into life and win games on his own with his pace, power and dazzling footwork.

Solskjaer’s decision to sell Lukaku looked questionable at the time, but would Martial have had such an impressive season had the big Belgian remained at the club? He has not been missed, and Martial is a much better fit for the fluid, free-flowing United Solskjaer wants, rather than the cumbersome and clumsy Lukaku.

Martial, in tandem with Marcus and Mason, hit 62 between them, quite an achievement for a young trio in a team that drastically underachieved for half the season. Learning from the best, it’s no coincidence that United’s attack is the strongest area of the team and Martial is – and will continue to be – a huge part of that. In the 24-year-old Frenchman, the Reds should look no further when it comes to crowning their Sir Matt Busby Player of the Year.