Manchester United’s Premier League campaign gets underway in under a month’s time and Ole Gunnar Solskjaer’s men have learned their fixture schedule for the new season.

United are scheduled to play Burnley on the opening weekend, but that game is set to be postponed so the Reds can have at least 30 days rest after their Europa League semi-final exit to Sevilla.

Therefore, the Reds begin their season a week later, with Crystal Palace the first opponents at Old Trafford.

Remarkably, the likelihood is that Solskjaer will name exactly the same back five that started last season’s opening game against Chelsea which ended in a 4-0 victory.

United require an accomplished centre-half in the summer transfer window, but there are doubts about how much would club are willing to stretch their finances and acquire further signings if they secure their top target.

Luke Shaw will hopefully regain fitness in time for the new campaign after missing the final games of the league season and the condensed Europa League competition through injury.

Solskjaer faces a huge goalkeeping decision with Dean Henderson now back at the club after sending an emotional goodbye message to Sheffield United.

Henderson won’t settle for a deputising role, but we feel number one David De Gea will still be given the nod after being backed staunchly by Solskjaer throughout his dismal period of form.

Paul Pogba and Fred provided an energetic midfield double pivot in the loss to Sevilla and it wouldn’t be a surprise to see the mobile duo start against Palace on the opening day of the season.

Alternatively, Nemanja Matic or Scott McTominay could also be selected alongside Pogba presuming there are no midfield injuries.

Totemic Bruno Fernandes is an almost certain starter if fit and the Portuguese playmaker will operate in behind a dangerous attacking trident.

Anthony Martial had his best goalscoring season for the Reds in the 19/20 season and deserves the chance to lead the line again.

Marcus Rashford’s form dipped after the restart with the England international still recovering from a major back injury.

But he now has a welcome break to recharge the batteries and will hopefully come back firing on the inside left-channel.

The starter on the right-flank will depend on whether United can secure the signing of their prime target Jadon Sancho this summer.

United’s interest in the Borussia Dortmund forward is an open secret and ESPN report that the club are still determined to sign the 20-year-old, despite the deal being held up by disparities in personal terms and agent fees.

If Sancho does arrive at Old Trafford this summer, he would likely initially take the starting berth of teenage sensation Mason Greenwood, who would be an effective substitute anywhere across the front three. 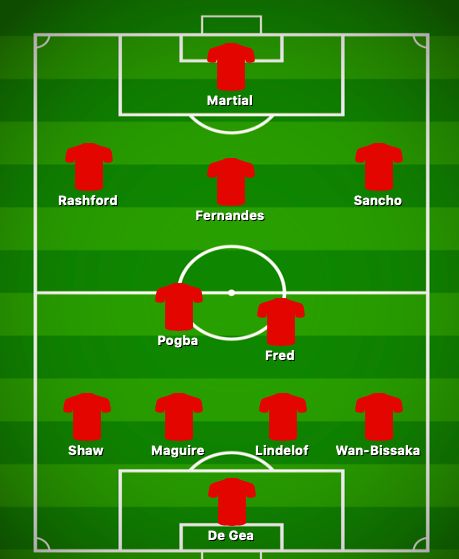 READ MORE: Opinion: Why Anthony Martial is Manchester United’s Player of the Season