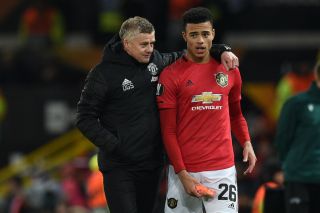 Manchester United have revealed how unique the development of teenage sensation Mason Greenwood has been and believe he’s on the right track to establishing himself as a Premier League footballer.

Greenwood, 18, has enjoyed a monumental rise to become one of European football’s hottest talents after scoring a remarkable 18 senior goals in all competitions this season.

The youngster’s irresistible form, especially when deployed on the right of a front-three has even prompted questions as to whether or not the club should be seeking to spend over £100m on Borussia Dortmund’s Jadon Sancho.

Greenwood’s flying start to life as a senior pro is so rare that the excitement surrounding his talent is acknowledged not just by United fans, but also by rival fans.

In an exclusive interview with United’s head of youth academy Nick Cox, Stretty News asked whether the club expected the young Englishman to experience such a good breakthrough.

“I would suggest that Mason [Greenwood] stood out right throughout the journey,” Cox said.

“He certainly had a lot of profile when he was within the youth team, scored a lot of goals and playing under 23s as a very young man.

“But I wouldn’t suggest his journey is the most typical journey, it’s actually the exception to the rule.

“When young boys stand out from a young age and are constantly ahead of the curve and they debut young and then put a run of games together young and score goals, it’s utopia. It’s wonderful to see.”

In light of Greenwood’s amazing rise through the United youth ranks to establishing himself as a first-team member this season, Cox was keen to issue a reminder that there is still a lot of work to be done, he said: “It’s been a wonderful experience for him. Everyone is really really proud of him.

“But it’s just a moment in time and everyone needs to keep a little grounded and level headed because a good career is 15 or 20 years long.”

Speaking in terms of what fans can expect to see from the talented Englishman next season, Cox admitted that expected game-time is unknown at this stage but went onto say: “Slowly he needs to establish himself as a Premier League footballer and he’s on track to do that, but he’s not there yet.

“He needs to keep working and he needs to keep grounded, everyone at this club will take that approach of staying level headed and support him because there will be challenges ahead.

“There will be days when it doesn’t go well for him and other days when he finds it hard.”