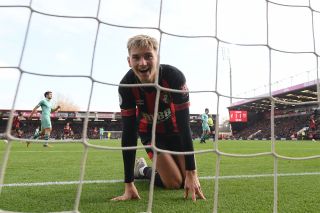 Manchester United are reportedly considering turning their attentions to Bournemouth’s David Brooks after talks for Jadon Sancho have broken down with Borussia Dortmund, however, Stretty News understands that United will not make a summer move for the young Welshman.

Brooks, 23, is rumoured to be a transfer target for Ole Gunnar Solskjaer as he looks to turn his summer transfer window attentions to possible right wing alternatives.

The young attacker missed most of this season due to undergoing ankle surgery but did endure a very decent campaign in the 2018-19 season when he managed to be directly involved in 12 domestic goals in just 29 starts.

According to multiple reports the United hierarchy are seriously considering opening talks with the recently relegated Bournemouth with a view to secure the young Welshman’s services.

However, Stretty News has recently obtained information from a source that Brooks is not expected to become a serious transfer target for the Reds.

We understand that United regard Brooks as a good talent but accept he wouldn’t get in ahead of who the club already have at their disposal, therefore, trying to sign him would make little sense.

We have been advised that there is no active attempt to sign Brooks nor is one expected.