Manchester United goalkeeper Dean Henderson has sent an emotional message to Sheffield United supporters, all but confirming that he won’t be returning to Bramall Lane for another loan spell next season.

Henderson has enjoyed an outstanding two seasons in South Yorkshire, playing a key role in Chris Wilder’s side promotion to the Premier League and the subsequent extraordinary eighth placed finish in their maiden season in the top flight.

And he has sent a heartwarming message to Sheffield United supporters, signing off an extended post with ‘Once a blade, always a blade’ after expressing his excitement at the next chapter in his career.

As per Sky Sports, Bournemouth goalkeeper Aaron Ramsdale is undergoing a medical at Sheffield United and is expected to be Wilder’s new number one next season.

Henderson’s message plus the news of Ramsdale’s transfer makes the goalkeeper’s short-term future slightly clearer as he won’t be spending a third season out on loan at Bramall Lane.

But it remains to be seen whether he will challenge David De Gea for the number one spot at Manchester United next season.

Ole Gunnar Solskjaer has a key decision to make over Henderson’s future as he can’t afford to let England’s most talented young goalkeeper leave permanently.

The United boss has backed De Gea at every opportunity, so Henderson may have to remain patient and gain further experience elsewhere next season if he is not content with the role of the Spaniard’s understudy at Old Trafford. 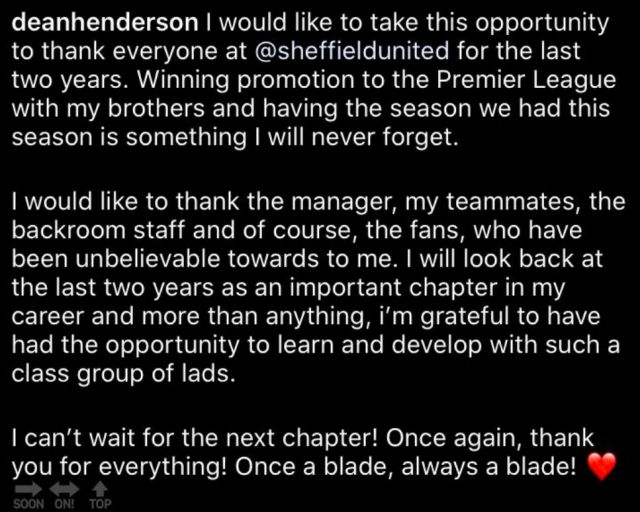