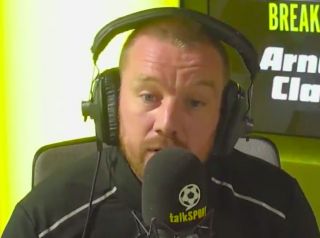 Martial has enjoyed his best goalscoring season in a red shirt this season, netting 23 goals in all competitions.

But the Frenchman has come under fire after some profligate finishing cost United a place in the Europa League final as they crashed out to Sevilla on Sunday evening.

Former Tottenham midfielder and Billericay Town manager O’Hara suggested Martial is not the type of forward that could spark a realistic challenge for the Premier League title under Ole Gunnar Solskjaer next season.

Instead, he made cases for Harry Kane, Raul Jimenez, Cavani and Ings as being better suited to playing up front in Solskjaer’s system.

Kane and Jimenez are excellent finishers that would offer the Reds a different platform to attack from. But there is realistically no chance of prizing them away from either Tottenham or Wolves.

Meanwhile, the notion that free agent Cavani, who at 33-years-old was released by PSG this summer, is more likely to take United to the top than Martial is frankly ridiculous.

Cavani scored 4 goals in 14 Ligue 1 appearances last season and should not be a player that is considered by Solskjaer.

Granted, Ings has had an outstanding goalscoring season and perhaps does not receive the credit he deserves.

The 28-year-old finished just one goal behind Jamie Vardy in the race for the Premier League Golden Boot award after an unprecedented campaign under Ralph Hasenhuttl.

But that was the first time in five seasons the injury-plagued forward had scored over 10 goals in a single campaign and there is no tangible evidence he would perform better at United than Martial.

Martial is an elite forward who still has plenty of time to develop after one full season as Solskjaer’s main man up top.

United could sign a proficient finisher to provide competition for the 24-year-old, but won’t replace him with an ageing striker who does not suit the manager’s methods.

Listen to O’Hara’s debate with journalist Neil Custis below, via TalkSPORT:

This is a brilliant listen 🍿 pic.twitter.com/8eAqJ4xZxd