Manchester United’s frailties in defence were exposed once again as Ole Gunnar Solskjaer’s side lost their third semi-final of the season by conceding two avoidable goals.

The Reds’ season-ending defeat to Sevilla will have been tough to take, particularly because Solskjaer’s men were the more accomplished side throughout the 90 minutes.

Harry Maguire and Victor Lindelof’s defending for an innocuous ball into the box was elementary, allowing Luuk de Jong to sneak in ahead of Aaron Wan-Bissaka at the back post to score the winner late on.

United failed to score as single goal in open play in either their quarter-final tie against FC Copenhagen or semi-final against Sevilla.

There’s little doubt that an elite forward with a clinical edge should be prioritised this summer, but a proven central defender who does not make inexplicable errors surely also has to be on the agenda.

Upamecano is one of the most talked about central defenders across Europe right now and with good reason.

The 21-year-old’s top-class performances have guided RB Leipzig to an unlikely Champions League semi-final, where they will meet Paris Saint-Germain on Tuesday evening.

In truth, Upamecano has all Solskjaer could ask for in a young defender. He is physically imposing, agile, quick in recovery, composed in possession and a proficient passer.

There is little doubt he will become a level above Victor Lindelof, who is under the spotlight after three glaring mistakes made between the restart and the end of the campaign.

But while Upamecano appears to represent the perfect option, United may have missed the boat after Leipzig announced in July that their starlet has signed a new contract extension.

Of course, every player has a price, particularly in today’s market, and Upamecano would be a huge coup if he came to Old Trafford instead of a number of other European suitors.

However, the chances of him moving on this summer seem slim after he only recently committed his future to his Bundesliga club.

Dayot #Upamecano has extended his contract with #RBLeipzig until 2023! 😄😄😄

Koulibaly is a proven, world-class, if not unattainable option that plenty of United supporters would love to see at Old Trafford this summer.

The Senegalese international has made his name as one of Europe’s most dominant central defenders during his six years at Serie A giants Napoli.

Similarly to Upamecano, Koulibaly is an imposing figure but also adept with the ball at his feet and at 29, is in prime years.

But a player of such ability and experience demands a huge asking price and a deal for Koulibaly would surely only be possible if the Reds miss out on Borussia Dortmund forward Jadon Sancho. 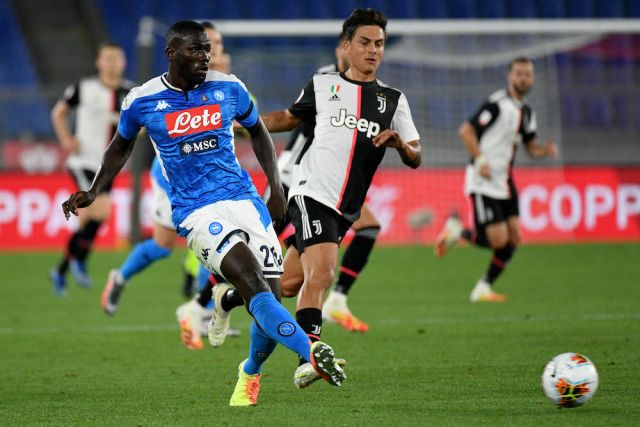 A wildcard option that was discussed as one of Europe’s most exciting talents during Ajax’s run to the Champions League semi’s last season.

United’s interest in the Dutch international was well documented last summer, but De Ligt chose to move to Juventus.

The 21-year-old made 26 starts in Serie A this term, having mixed success during his first season in Italy.

He remains one of the most promising young centre-backs across Europe and could still be a player Solskjaer builds his defence around for years to come.

United can now offer De Ligt Champions League football, giving them more pulling power if they were to reignite their interest.

Solskjaer is also building a nucleus of youthful talent and Old Trafford is a project De Ligt could see as an exciting next step in his career.

But he may also feel he has unfinished business in Turin after blowing hot and cold under Maurizio Sarri in his first season.

De Ligt will still want to go on and win the Champions League after this season’s disastrous exit to Lyon, and he has a much better opportunity to do that at Juventus, albeit under an untested new coach in Andrea Pirlo.