Manchester United were the dominant side in their Europa League semi-final defeat to Sevilla on Sunday evening.

On considerable reflection, Ole Gunnar Solskjaer’s men only have themselves to blame in a game they looked relatively  unthreatened in until being hit by the Luuk De Jong sucker punch late on.

The profligate finishing from Solskjaer’s frontline, plus the excellence of Sevilla ‘keeper Yassine Bounou ultimately denied United advancing to the Europa League final where they would have met Inter Milan.

Bounou’s inspired display thwarted United in a similar fashion to the Herculean effort from FC Copenhagen shot-stopper Karl-Johan Johnsson in the quarters.

It’s hardly a surprise to see two United players named in the team after a positive display excluding the result.

But it is perhaps surprising to see the two players from Solskjaer’s side that made the team that was dominated by  Inter stars.

Paul Pogba deserved his place after an impressive performance in a double midfield pivot with Fred.

As noted by WhoScored, Pogba made four key passes in the game, and his cross-field pass to Marcus Rashford in the first-half was world class.

Rashford, who squandered that opportunity created by Pogba, was nowhere near at his optimum and is a bizarre inclusion in this team.

The England international was poor against Sevilla and faded as the match wore on. He was fortunate not to be taken off sooner for the likes of Juan Mata and Odion Ighalo after failing to make any real impact.

Granted, Rashford did win the penalty that gave United an early lead, but that was his solitary influence on the game.

Admittedly, WhoScored note that Rashford is selected largely because there was insufficient options on the left-flank, rather than playing well himself.

Rashford is in clear need of a rest and needs to recharge the batteries before looking to hit the ground running ahead of the new Premier League campaign which is just under a month away.

See the Europa League team of the semi-finals below, via WhoScored.com: 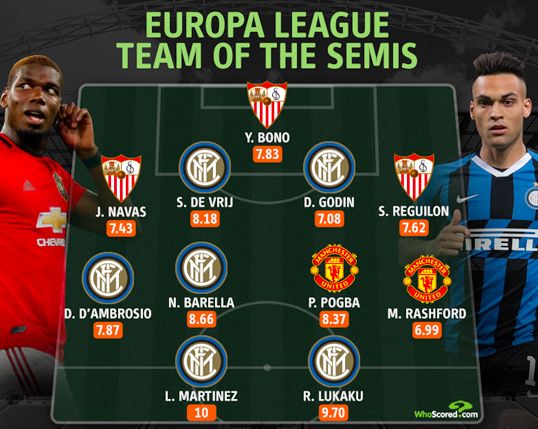