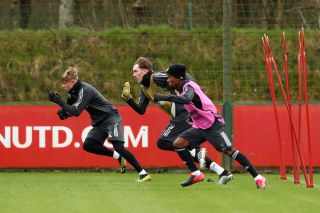 James Garner is primed for a loan move away from Manchester United this summer as he seeks regular first-team football next season.

According to the Manchester Evening News, Garner is one of several Under-23 players set for loan transfers this summer as Ole Gunnar Solskjaer looks to accelerate the development of some his most promising academy stars.

Garner has not made a United matchday squad since December, but did travel to Cologne for the condensed Europa League tournament that ended with a semi-final defeat to Sevilla on Sunday.

And the MEN report that Garner’s representatives are now planning on finalising a loan move for the 19-year-old after the midfielder returned from Germany.

The Birkenhead-born youngster made three first-team starts under Solskjaer last season, all of which came in the Europa League knockout stages.

He has clearly outgrown age group football, but it is unclear which club he is likely to move to next season.

The Sun report that Championship promotion hopefuls Bournemouth and Swansea City are among the clubs chasing Garner’s temporary signature.

Garner is likely to follow Tahith Chong out of the Old Trafford exit door, after the Dutch winger left this week for a one-season loan at Bundesliga strugglers Werder Bremen.

And the talented duo won’t be the only players leaving on loan next season with Solskjaer reportedly planning a ‘mass exodus’ of his youngsters who are seen as ready for regular first-team football.