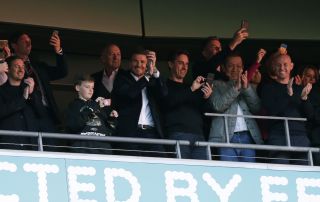 Manchester United are set to come up against Salford City in the first ever competitive fixture against the club owned by the Class of 92.

United’s Under-21’s and Salford have been drawn together in the EFL Trophy after regional groups were confirmed on Tuesday afternoon.

United were one of several invited clubs including the likes of Arsenal, Chelsea, Liverpool, Manchester City that will take part in the competition involving League 1 and League 2 clubs.

The Reds have been included in a group that also includes League 1 Rochdale and League 2 Morecambe.

The Moor Lane club have been promoted four times in six seasons since the takeover from Singaporean businessman Peter Lim and the Class of 92 in 2014.

Manager Graham Alexander led the side to an 11th placed finish in their first season in League 2 after they were promoted to the Football League for the first time in the club’s history in 2019.

This competition offers an opportunity for plenty of United’s youngsters to shine in men’s football and it will be a fascinating meeting between the two clubs where there is sure to be a competitive edge.

Manchester United will join us in the @EFL_Trophy_ Group 🅱️!