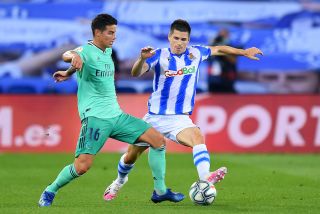 Therefore, you can expect to see him linked with Manchester United again.

The Real Madrid midfielder was a guest on Daniel Habif’s podcast, during which he expressed a desire to play in the Premier League or Serie A.

“I’ve already been in several good leagues and the only thing missing is Serie A and the Premier League,” Rodriguez said. “You have to see where I want to go or where they want me to go.

“Going to England would be a good thing, it’s a top league.”

Having already played for AS Monaco, Real Madrid and Bayern Munich, James has experienced football across Europe.

Rodriguez made just five appearances in La Liga last season as Real Madrid were crowned champions. He joined the Spanish giants six years ago but spent two seasons on loan at Bayern Munich before returning before the start of the recent campaign.

His contract expires in July next year and this could be Madrid’s last chance to recoup some of the money they paid for him six years ago.

The 29-year-old is not what United need right now. I can’t see Solskjaer wanting Rodriguez.