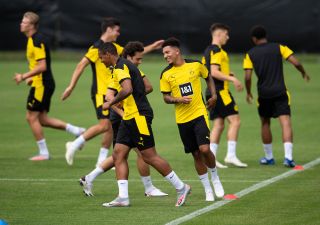 The footage they use (shared via @FootballDaily from Sky Sports) shows Sancho looking pretty happy in Dortmund training.

Sancho, 20, scored in BVB’s pre-season friendly yesterday against Austria Wien. It finished 11-2 to the German side and Jude Bellingham got his name on the scoresheet.

However, this update tells us that the race to sign Sancho is not over. And while it’s a one horse race with just United showing serious interest in the England international, the Reds must ensure all the time spent on getting Sancho is not a waste.

The report claims Sancho could still ask to leave Dortmund if United make an offer which is deemed close to what his present club wants. Does that mean he is about to hand in a transfer request?

United also need to sign a centre-back this summer. How long will a deal for one of those take? The Maguire deal took a couple of months to conduct last summer.