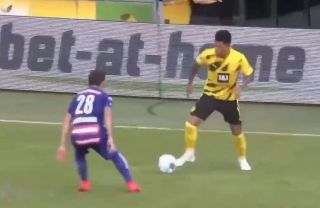 Jadon Sancho is the real deal but Borussia Dortmund pre-season friendly on Sunday can only be described as a walk in the park.

The Bundesliga side won 11-2 and Sancho was among the scores with new signing Jude Bellingham.

But it’s a piece a skill from United’s summer target that we want to focus on.

The defender in question gives up the second the ball passes him because he knows Sancho has him beat.

Jadon Sancho eliciting an ‘oh you!’ reaction from the fullback pic.twitter.com/B4vVIkomwo

It would be a huge bonus having Sancho operate on our right flank next season. Every full-back in the Premier League will expect the worst when travelling to Old Trafford, like the good old days!

You can watch full highlight’s of Dortmund hammering Austria Wien below – Sancho’s goal was BVB’s fifth of the match to make it 5-1.

Updates on Sancho when we have them.

Paul Scholes made it clear he wants Sancho at United during match coverage on BT Sport last night, as reported by The Express.