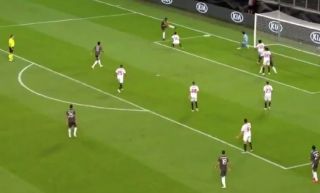 Yassine Bounou was excellent between the sticks as Sevilla booked their place in the Europa League semi-final.

Below we will take a look at just one of his stunning saves, but there were many that kept Sevilla in the game.

Bono as he is also known was terrific but the defenders in front of him were throwing their bodies on the line too.

The move we are going to focus on this morning starts with Bruno Fernandes, who finds Martial alone at the back post with a cross.

The Frenchman controls the ball before taking a shot at goal but Bono saves and the ball is kept in play for United to apply even more pressure.

How tf did we not score. pic.twitter.com/XkkyfCoFXX

Sevilla defend without conceding another goal which is what happened for the rest of the match and they won 2-1.