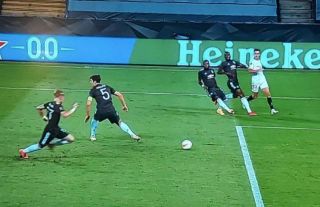 A lot of the mistakes we’ve made in defence this season have been avoidable.

Manchester United had 20 attempts on goal against Sevilla but could only find the back of the net after a Bruno Fernandes penalty.

All forwards other than Fernandes will come in for some criticism for not scoring, but the defence was woeful if not just as bad.

Both goals United conceded last night were as a result of mistakes at the back.

Brandon Williams was at fault for allowing Suso to score at the back post as Sevilla equalised but Harry Maguire was trending for his role in the goal.

The picture and footage below shows Maguire not even looking at the ball as it rolled past his foot. He then turns in a rather shocked fashion before Suso struck for goal.

Harry Maguire's defensive awareness is on another level.pic.twitter.com/9WhVM97B2M

Victor Lindelof, who partnered Maguire at centre-back, didn’t coat himself in glory either as he switched off towards the end of the match when former Man City winger Jesus Navas sent a cross in which allowed Luuk de Jong to book Sevilla’s place in the final.

Tonight they find out who they will face in the final: Inter Milan and Shakhtar Donetsk play the other semi-final at 8pm.

However, after United’s 2-1 defeat in Cologne, Maguire took responsibility in his post-match interview with BT Sport and admitted the players were “devastated” after losing another semi-final — their third this season.

"The boys in there are devastated."

"We need to get better. Losing is not acceptable."

Read more: Man United vs Sevilla: Three things we learned as the Reds crash out of another cup competition