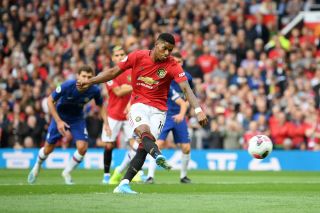 As the 2019-20 season draws to a close, I have looked back on some of the best moments during a campaign which saw Manchester United reach three semi-finals and finish third place in the Premier League.

We became the first English top-flight side to reach three cup semi-finals and not reach a single final — but it’s easy to see United are making progress on the pitch.

After what had been an up and down season to this point for the Reds, passionate midfielder McTominay provided the United faithful with one of the best feel-good moments of the entire campaign.

The Scotsman’s stunning goal against arch-rivals Manchester City in the side’s second Premier League match-up back in March sent the Old Trafford faithful into a mad frenzy.

Is there anything United fans enjoy more than seeing one of their own come through the club’s academy ranks and seamlessly make the transition to first-team top-flight football?

Teenage sensation Mason Greenwood has done exactly that; the 18-year-old has endured a monumental rise to the forefront of European football after a break-through campaign saw him net an impressive 19 goals in all competitions and set a further five up.

A star in the making.

What a moment this was!

Rashford’s Ronaldo-esque rocket of a free-kick against Chelsea in the Carabao Cup back in October 2019 saw him win the club’s goal of the month award (via ManUtd.com).