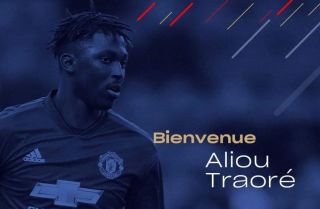 Stade Malherbe Caen has confirmed that Aliou Traoré has joined them from Manchester United on loan for the 2020-21 season.

Stade Malherbe Caen has confirmed that Aliou Traoré has joined them from Manchester United on loan for the 2020-21 season.

The Ligue 2 side, commonly known as SM Caen or SMC, has a geographical rivalry with Le Harve (Le derby normand) which is the club Manchester United initially signed Paul Pogba from as a youngster.

It will be hugely beneficial for the 19-year-old to get first-team football after spending the past season in United’s U23s.

Traoré does not turn 20 until January and he will hope to come back to United and be in contention for a place in the first-team squad. Moreover, the midfielder who can also play in wide areas will want to make his first-team debut for Caen sooner rather than later to help them challenge for promotion to Ligue 1.

This season he scored four goals in 14 appearances for the U23s and he wasn’t shy when speaking to French media about his desire to play senior football on a more regular basis.

“I would like to start as a pro,” he told RMC Sport. “Like I said, I think I have the baggage to do it. I hope it will be in Manchester, otherwise why not go and find playing time elsewhere.

“I only have one year of contract left so yes, I’m not closing the door. But if I’m leaving, it’s for a professional group. I need an evolution in my progression and that goes through a professional workforce.”

We wish Traore the very best at Caen.