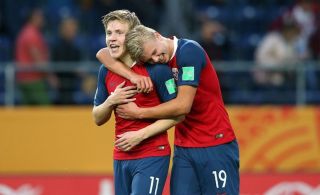 Hauge has been one of the standout players for the Norwegian side this season and it’s reportedly the second time Nielsen has watched the Norway U21 international.

Eurosport state United ‘may be sniffing to bring’ the winger to Old Trafford (H/t Sport Witness).

After the game on Sunday, Eurosport interviewed the player and asked him about Nielsen’s presence in the stands.

“It wasn’t my best game today, unfortunately. It’s a bit boring that he saw this match, but let’s hope he liked what he saw.”

Considering Hauge is a Chelsea fan they asked if United were the wrong team for him, to which he replied: “…all the teams in England are interesting. You have to put away your favourite team when it comes to your own career.”

Dagbladet have relayed more comments Hauge made in his Eurosport interview.

“If that’s right [United scout watching him], then it’s very positive. But it’s not something I can go around thinking about, because then my performance will drop.

“I have to focus on delivering. I will of course be very flattered if this is true, but I am now concentrating on performing with Glimt.”

When pushed even further on United’s alleged interested, he added: “It’s quite clear. When a club like Manchester United comes on the field, it will always be interesting.”

Credit to Dagbladet again for going an extra mile with their report to get a quote from United scout Nielsen, even though he refused to comment on whether he was there to watch Hauge.

“As Manchester United’s senior scout, I have a responsibility to keep up to date with what is happening in Scandinavia. Jens Petter Hauge plays, yes, but so do the rest of the players on the pitch. I check out all the players,” Nielsen said.

With the emergence of talents like Erling Braut Haaland and Martin Ødegaard, as well as prospects such as Sander Berge, United must be wondering if Norwegian talent runs any deeper?

Solskjaer should already have a good idea of talents playing in Norway.