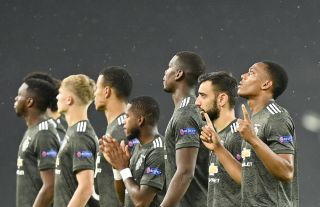 Ole Gunnar Solskjaer has achieved this season’s objective to guide Manchester United back into the Champions League.

The biggest shame is not having a trophy to show for our progress with our season coming to an end as United became the first English side in the top-flight to lose three semi-finals in one campaign.

We have rated each player out of 10 for the season they’ve just had and whether or not they should leave the club this summer.

Please note that the squad is small as it is, and I’ve only selected a few that should be sold with that mind.

I am no longer convinced De Gea should be United’s No.1. Still capable of eye catching saves but he’s not consistent enough over 38 league games. Has the look of a goalkeeper who needs a move.

Good season but next term I’d like to see improvements on the ball and crossing.

Big concern for United if Lindelof is starting at centre-back next season. Not good enough.

Better defender than Lindelof but under the impression Solskjaer doesn’t fully trust him. Missed a lot of the season with an injury he suffered in pre-season.

Far from perfect but perhaps the biggest reason we’ve been better from the back this season.

Would have scored higher but hasn’t played enough due to injuries. Could be the answer long-term but we’ll never know unless he gets fit.

His best season at the club. Missed him towards the end through injury and never thought I would be writing the first two words of that sentence about Shaw.

Impressive debut season from the academy graduate. Fantastic addition to the squad and more proof Solskjaer an eye for emerging talent.

Although he was terrific following the turn of year, Matic was awful at the beginning of the season which casts a shadow on his rating. Recently signed a new contract with the club on the back of improved form.

Returned to full fitness and form after lockdown but this is months of drama because his agent couldn’t keep him mouth shut. That said, relations appear to be good again and I wouldn’t be surprised if he agreed new terms at Old Trafford. Had he played more games I’d be rating Pogba higher. No question about that.

Responsible for transforming United’s season since his arrival in January – and for that reason my player of the season. We wouldn’t have Champions League football to look forward to next season without him.

Good season for the Brazilian as he showed signs of improvement. Played less games after the restart because Paul Pogba was back in town, but I think he can reflect positively on the season he’s had and become a good squad player.

My favourite moment of the season was McTominay’s winner in the Manchester derby. He celebrated like a supporter on the pitch in stoppage time but knows he will need to show more quality to get ahead of Matic in the line-up.

Started well but has struggled since Christmas. Came from the Championship as an inexperience player. James definitely gave us reasons to be encouraged this season.

If his season was brought to a half over a serious injury, he’d have way more goals and possibly a higher rating. This was Rashford’s most prolific season in the first-team and I can’t wait to see what he will bring to the team next season.

17 Premier League goals and six assists. A huge improvement from Martial as he steps into the right direction.

Came in and scored goals. I don’t think he’s a fantastic centre-forward but he still gives us something different.

Feels like it would be a good move for everyone concerned if Lingard was moved on this summer. Doesn’t cut the mustard but he deserves more credit than what he gets for his contribution over the years.

Past his best but think there’s been games towards the end of the season that he should have played minutes in.

It hasn’t worked out for the Brazilian at united. Sell.