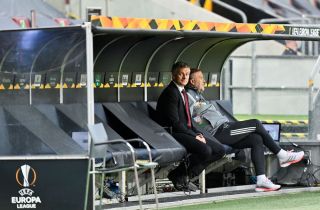 There is much to enjoy about this vibrant, young and exciting Manchester United side. A side that put together a 19-game unbeaten run to cut  swathe through the league and come from nowhere to rise into the Champions League positions with a top three finish.

It’s the most likeable United side we’ve had for ages, with one of the best front threes in Europe – from Marcus Rashford, Anthony Martial and Mason Greenwood, to a brilliant mobile and dynamic midfield with Paul Pogba and the orchestrator of United’s late season surge, Bruno Fernandes.

For that alone, Ole Gunnar Solskjaer’s first full season in charge will go down as a minor triumph. But, on reflection, a top four place with the riches of Champions League football is a minimum requirement for any United manager.

Even the most ardent ABU cannot deny there’s been progress, and that – ultimately – comes before success in the dictionary. Yet there remains a fault line running right the way through Solskjaer’s Manchester United.

This is not a team, not yet at least, that can deal with pressure. I don’t mean the pressure of actually playing for the club, of donning the iconic red of United and strutting your stuff in front of millions. I mean the pressure of getting over the line, of getting the job done, of taking the final step to victory when glory is within sight. Whenever this side has a chance to achieve something tangible, they blink. We did it at Leicester to clinch Champions League qualification on the final day, but that was a league game. Had United beaten Southampton and West Ham before that final shootout, they would have secured that top four spot even before a ball was kicked on the final day. We ended falling over the line. The Reds had three chances to make sure of a top three finish, but yet only did so in the very last moment. It was still an achievement but one that came with a caveat.

To lose one semi-final is perhaps unfortunate. To lose two, careless. But three? That is simply unforgivable no matter what club you are, never mind one with the resources and ambition of Manchester United. The Reds had become the first United side since the 2009 vintage to get to three semi-finals in the same campaign. That’s the good bit. There’s bad news, too, though.

As we slipped out of a Europa League competition they were strongly fancied to win, we set an unwanted record, becoming the first English side to lose three semi-finals in three separate knockout cups within the same season. Ouch.

The Reds fell short in the Carabao Cup, although there was certainly no disgrace in a narrow 3-2 aggregate loss to eventual winners Manchester City over the two games. Then came the error strewn defeat to Chelsea in the FA Cup before last time’s gut wrenching KO at the hands of the canny and streetwise Spaniards. They showed United what’s needed to get over the line in these games. This United side do not, not yet at least, have what it takes to make that final jump from promising contenders to serial finalists or winners. They have been exposed as nearly men.

That, of course, may come given time and money. This is, after all, the youngest squad in the Premier League. Jurgen Klopp lost five finals before finally breaking his duck, so it can be done. Sir Alex Ferguson himself took four years at Old Trafford before climbing on the trophy winning train, and when he did so he could not stop. I’m not for one minute of course comparing this side and this manager to two of the all time greats, but it shows the virtues of patience. To get to the latter stages at all is creditable, but it means little when you don’t win it. We may as well have gone out in the groups.

United played well against Sevilla, they should have put the game to bed and were ultimately punished for profligacy. There’s an argument to be had that United were very unlucky in two out of the three semi finals, but it only exposed the theory that United have a tendency to suffer stage fright at the business end of a tournament. What Aaron Wan-Bissaka and Victor Lindelof were doing, bemused and ball watching as the cross came in, only they will know. But it was a lapse that epitomised the flaws in this side. Lindelof had been excellent up until then but let the side down when it mattered.

United have plenty going for them and there are definitely positives to take from this extraordinary, gruelling season – a campaign like no other. The pace, variety and unpredictability of that sizzling Rashford/Martial/Greenwood is stunning, with Jadon Sancho (hopefully) still to come. The record this seasons shows, though, that United have not come up with the goods when it matters. There’s the small matters of finishing 33 (THIRTY THREE) points behind the league winners and a third successive season without a trophy for the first time in three decades. Nearly is nowhere near good enough for this club, and Solskjaer will know that better than anyone. So while there are cautious grounds for optimism, United still have a long way to go.

Read more: Manchester United at risk of undoing a year’s worth of work