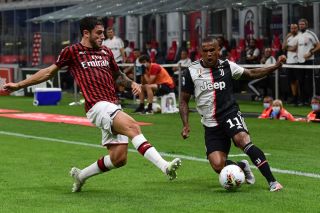 Sancho, 20, has been believed to be the Red’s number-one priority this summer, however, his monumental fee understood to be upwards of £100m, as per The Times, is becoming a sticking point between both clubs who have failed to strike a deal.

The difference in valuations on Sancho between United and Dortmund are understood to be the catalyst behind the Reds seeking potential alternatives and one of those secondary targets is understood to be Juventus’ Costa.

According to Sky Sports, the 29-year-old is interested in joining up with Ole Gunnar Solskjaer as he wants to depart the Italian champions.

Despite only starting 11 games in all competitions this season the Reds have still tracked him closely as they look to bolster their wide attacking options, however, there is a concern over Costa’s injury proneness.

Leading transfer expert Gianluca Di Marzio said: “Juventus want him to leave. His agents are moving to find a solution, they have talked to Manchester United, to understand if the would be interested.

“They will think about it, but the problem is that Douglas Costa is often injured, so this is a problem for a club that wants to buy him. The agents have talked to Manchester United, for sure, and have proposed his transfer.”

The interest comes in light of Solskjaer’s comments after Sunday’s crushing Europa League semi-final defeat against Sevilla where he eluded to needing greater options on squad depth.