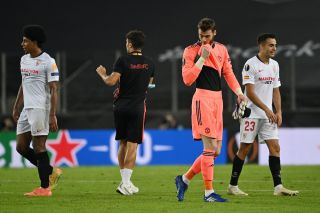 Very disappointing to lose three semi-finals in one season.

It hadn’t happened to an English top-flight side until last night when Manchester United crashed out of the Europa League.

The Reds opening the scoring through a Bruno Fernandes penalty before their Spanish opponents took control of the game and scored an equaliser through former Liverpool attacker Suso.

United went into the game after already suffering semi-final defeats in the FA Cup and Carabao Cup, so we’ve now become the first ever English top-flight team to fall at the semi-final stage of three different competitions within the same campaign, as per @OptaJoe.

0/3 – Manchester United in 2019-20 (League Cup, FA Cup, Europa League) are the first ever English top-flight team to fall at the semi-final stage of three different competitions within the same campaign. Heartbreaking. #UEL pic.twitter.com/JLeEbdAZj6

The Carabao Cup semi-finals were played over two legs and against rivals Manchester City, who went on to win the tournament. A shocking first-half display in the first leg ruined our chances of reaching the final. After losing the first leg 3-1 at Old Trafford, United bounced back for the return fixture and won 1-0 despite Nemanja Matic being sent off.

As for United’s knockout in the FA Cup, we can have no complaints because Chelsea were by far the better team on the day and Ole’s side just didn’t show up. It was a blow but at least we had the Europa League to fall back on.

But that feeling was short lived because Sevilla were able to beat United last night to book their place in the final.