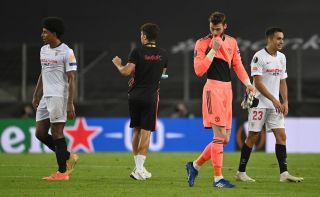 David de Gea remains confident in his ability despite widespread criticism over his position and performances.

The Spaniard has set an objective on helping Manchester United challenge for trophies next season — something they failed to do this season despite reaching three semi-finals, all which were lost…

On Sunday in Germany, Sevilla secured a 2-1 comeback win to end United’s hopes of adding silverware to their third-place finish in the Premier League. It wasn’t to be but De Gea was somewhat surprisingly given the nod for the semi-final ahead of Sergio Romero, who usually plays the cup games (was also dropped for De Gea in the infamous FA Cup semi-final defeat against Chelsea at Wembley).

He could do little to prevent the defeat in Cologne, but questions are still being asked if De Gea should be first choice next season, especially with Dean Henderson potentially given a chance to earn his place at Old Trafford.

The Spain international has made too many high-profile errors and the pressure is not only on him to improve, but Solskjaer to make the right call.

De Gea has told PA news agency that he believes in himself (via Irish Examiner).

“No, I trust in myself. I showed my qualities all the years, so I just keep available for the manager. I’m always ready to play and try to help the team as always, as I did always.”

Solskjaer as manager has always backed De Gea regardless of what mistakes he’s made, as per GOAL. And he hasn’t given any hint that the Spaniard’s time to at the club is near an end.

“I think we improved this season,” De Gea said after conceding two goals against Sevilla. “We were 14 points behind the third position in the Premier League. We finished third at the end.

“We play very good I think (in) many games. Today we deserve to be in the final, if we are honest.

“But maybe we need a bit of experience, more experience in the team, but we have to score the chances. That was the point for us for tonight’s game.