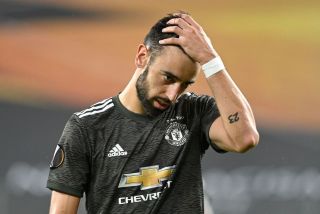 Manchester United star Bruno Fernandes has sent a message to supporters after the disappointing Europa League semi-final defeat against Sevilla.

Fernandes scored United’s only goal from the penalty spot to open the scoring, but Sevilla found their groove and went on to win the game 2-1.

It’s disappointing after all the team’s hard work and clear progression that we’ve ended the season trophy-less.

The Portuguese star took to Instagram after the match and said this was the time to reflect and attempt to bounce back stronger.

Unfortunately our journey in the @europaleague ends here. It wasn’t what we expected. We wanted to be in the final and fight for the trophy we so desired. Whilst we congratulate @sevillafc for making it to the final, we still played well and we didn’t deserve to stop here. It is now time for rest and to reflect so that we come back even stronger 💪🏻 and reach the goals we set ourselves for the next season! Thank you to all my teammates and staff who welcomed me so well over these past months at the Red Devils. I hope to continue to learn and grow everyday with you, and that we conquer many titles in the future! Together we loose , together we make mistakes and together we grow ❤️ #MUFC

Last night’s outcome is a crushing blow not only for supporters, but the players and staff. Ole Gunnar Solskjaer would have wanted to win a trophy in his first full season in charge but it wasn’t to be.

This was also the third semi-final defeat United had suffered this season.

Fernandes, who played in two of those three semi-final ties, and they’re the only two losses he suffered as a United player since his January arrival.

United missed two many chances throughout the match and paid the price for not being clinical enough. The board must now back Solskjaer to ensure we see more progress next season, and hopefully a trophy or two.