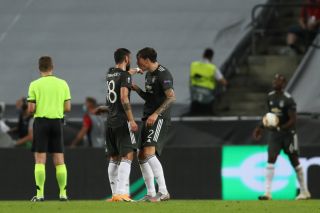 Immediately after Sevilla took the lead in Cologne after some shoddy defending, the Manchester United duo clashed on camera.

Andreas Pereira has jumped to Fernandes’ defence after his on-field altercation with Lindelof and says the midfielder would ‘never’ blame someone else for conceding a goal.

Tensions were high and United were up against a very good side.

From playing football in my youth and attending matches over the years, it’s not unusual for players to clash. They all want the same thing and I would be a lot more concerned if they didn’t care enough to throw the handbag every now and again.

You could tell United were getting frustrated and it was the boiling point when Fernandes confronted Lindelof.

Responding to Bleacher Report’s post about the incident on Instagram, Pereira said: ‘We win as a team but we lose as a team as well. He didn’t blame nobody and would never do that.’

Pereira is clearly talking as someone with experience – who knows Fernandes’ character better than most – and it’s not as if the altercation got out of hand. Lindelof was told off and he probably made the argument that United’s attackers weren’t putting away their chances.