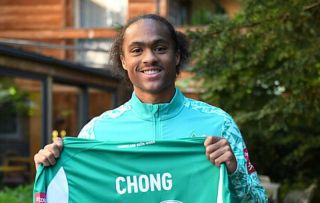 Tahith Chong has been on the fringe of the Manchester United first team and he’s clearly talented, so the club have made the right move by sending him out on loan for a season.

The Dutch winger has joined Bundesliga side Werder Bremen on a season long loan — and could make his competitive debut when the domestic season in Germany gets underway next month.

Werder Bremen’s official website announced the move with a picture of Chong without his trademark hairstyle — as well as a training picture on Twitter, as seen below.

Chong is mostly known to play on the wing but in his last game for United, but he played at left-back after coming on as a substitute against LASK in the earlier rounds of the Europa League.

It will be great for him to get out on loan and experience regular game time at such a high level, and there is nothing to suggest that United have a recall option in January.

I think Ole Gunnar Solskjaer will be delighted once it’s clear Chong is getting the game time he needs to further develop.