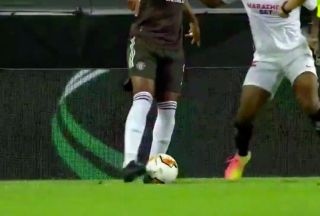 Manchester United and Sevilla are currently embroiled in an exciting Europa League semi-final with the scoreline 1-1 after Bruno Fernandes’ opening goal was cancelled out by Suso.

Fernandes smashed home an early penalty after team-mate Marcus Rashford was fouled in the Sevilla box.

One moment of play which has gone under the radar was the role number-nine Anthony Martial played in the Reds’ attacking move.

The classy Frenchman played a simply sublime sweeping ball through to Rashford after fooling the Sevilla defence into thinking he was going to shift it in the opposite direction.

See the ball below, via BT Sport: