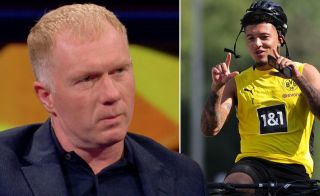 Manchester United legend Paul Scholes has made a strong claim that if number-one transfer target Jadon Sancho were on the pitch for the Reds tonight, they’d have scored and still potentially be in the Europa League.

Despite the fact the 2019-20 season is technically still underway, even if United had of signed Sancho weeks ago, he wouldn’t have been eligible to play, but we understand the sentiment, Paul.

Not only do I understand the ex-midfielder’s cries to the United board to secure Sancho, I also agree.

After United go crashing out of yet another cup competition at the semi-final stage, it has become even more apparent that there is a clinical edge missing.

The Reds had upwards of 20 attempts on Sevilla’s goal this evening but only managed to convert their single goal of the game from the penalty spot.

Scholes believes that United had so many chances, especially in the first-half they should have been scoring and only players of Sancho’s ilk can bring silverware back to Old Trafford.

Scholes’ statement comes in a week which saw manager Ole Gunna Solskjaer issue a warning to the United board to spend money or risk being left behind by their rivals. See footage below (courtesy of BT Sport):

“If they want to win trophies, they’ve got to start spending money.

“If Jadon Sancho was in that team tonight, United are scoring.”