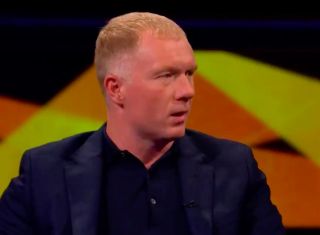 Manchester United legend Paul Scholes has weighed in on his former side’s team news which sees number one David De Gea get the nod ahead of Argentinian Sergio Romero.

The Reds are set to take on Spanish outfit Sevilla later this evening in the first of two Europa League semi-finals; tonight’s winner will await to learn their final fate when Inter Milan face-off against Shakhtar Donetsk tomorrow night.

Back-up keeper Romero had started every game in this season’s Europa League, however, similarly to what happened in the FA Cup, as the competition reaches it’s climax, manager Ole Gunnar Solskjaer has opted in favour of Spanish international De Gea.

Speaking in light of the decision to recall De Gea to the starting line-up, ex-United midfielder Scholes agrees it is the correct decision.

Listen to Scholes’ thoughts below, via BT Sport:

“David de Gea HAS to play for me!

“Ole knows, or thinks, David is his best goalkeeper. If you’re in a semi-final you can’t afford to take risks.”