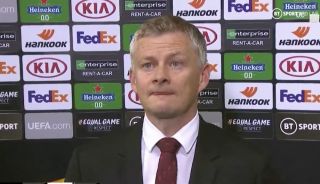 Manchester United’s 2-1 defeat to La Liga side Sevilla sees the Reds crash out of this year’s Europa League at the semi-final.

Manager Ole Gunnar Solskjaer will be bitterly disappointed not to reach Friday’s final and go onto lift the same trophy former manager Jose Mourinho did in 2017. However, despite praising his side’s ‘scintillating’ creative build-up play this evening, Solskjaer has issued a damning verdict on his side’s ability to put the ball in the back of the net.

Despite taking an early lead after Marcus Rashford was brought down inside the Sevilla box by defender Diego Carlos which saw Bruno Fernandes emphatically convert from the spot, the Reds were soon pegged back level after former Liverpool man Suso evened proceedings up.

United continued in the game as the most dominate of the sides creating upwards of 20 attempts of target, however, failure to convert from open play left the match on a knife’s edge.

The Reds’ European fate was sealed with just 10 minutes to go after Luuk de Jong latched onto the end of a whipped ball into the box which left centre-back partners Harry Maguire and Victor Lindelof confused and unable to deal with the attacker.

Speaking in light of his side’s disappointing defeat, Solskjaer took the time to praise his young Red’s creativity abilities but has admitted that their fruitlessness in front of goal were the key difference this evening.

Listen to his post-match thoughts below, via BT Sport:

“If you take your chances you’ll win comfortably, but that’s not always the case in football.”

“Since February we’ve been fantastic. It’s exciting to work with these boys.”