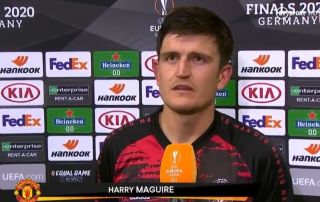 Harry Maguire confirms his Manchester United team-mates are ‘devastated’ inside the dressing room after wasting opportunities in their 2-1 defeat against Sevilla.

The Reds started with a high press and let Sevilla out after opening the lead.

It was all downhill from there but Maguire argues that United deserved to go through.

The United captain was asked about tensions on the pitch after Sevilla’s second goal. He made it clear that arguments of nature are going to happen because the players are working hard towards one result which is to win.

He stresses that losing is not acceptable at this club and that United want to do better than finishing third in the Premier League.

Unlike the FA Cup semi-final against Chelsea, Maguire claims United did show up tonight despite losing the game and missing out on another final.

Watch the interview below (footage courtesy of BT Sport):

"The boys in there are devastated."

"We need to get better. Losing is not acceptable."