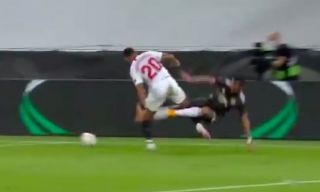 There is an ongoing joke amongst rival supporters that Manchester United are lucky with the amount of penalty decisions they have go their away.

Bruno Fernandes’ opening goal from the spot against Sevilla in the Europa League semi-final was the 22nd penalty the Reds have been awarded in all competitions this season.

But there was definitely an argument that Ole Gunnar Solskjaer’s men should have been given their 23rd just before half-time.

Diego Carlos makes absolutely no attempt to claim the ball when clearing out Fernandes, in an incident that would have been given a foul on any other area of the pitch.

It was bizarre that the altercation didn’t appear to be checked thoroughly by VAR after being initially dismissed by the referee.

See the video below, as posted by UtdArena. Footage courtesy of BT Sport:

If this happens in any other area of the pitch it's an obvious foul with little to no discussion:pic.twitter.com/bprsHHynBt