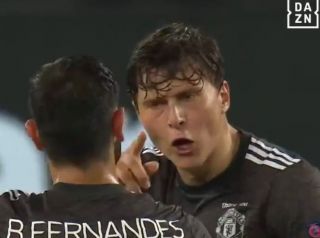 Having taken the lead early on in tonight’s crucial Europa League semi-final against Sevilla, the Reds found themselves 2-1 down with 10 minutes left to go.

Sevilla attacker Luuk de Jong gave his side the lead after he connected with a whipped ball into the box.

The United back-line appeared to have fallen asleep with centre-back pairing Victor Lindelof and Harry Maguire seemingly all at sea and right-back Aaron Wan-Bissaka suffering from a lapse of concentration.

As the Spanish outfit were busy celebrating what could well be the goal which sees them become the first team in this year’s Europa League final next Friday, the cameras picked up Lindelof and midfield maestro Fernandes engage in a heated argument.

Watch below (footage via DAZN):