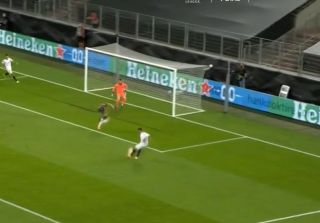 Manchester United defenders clearly felt aggrieved as a throw-in was given the wrong way to Sevilla in the lead up to their first-half equaliser in Cologne.

It’s been an open game thus far with Manchester United opening the scoring early on with a penalty kick converted by Bruno Fernandes. The Portugal star took a terrific spot kick and gave the goalkeeper little to no chance.

But it didn’t take Sevilla look to punch back.

Since United took the league our opponents from La Liga took control of the game and you could say they deserved the equaliser.

But the Reds felt aggrieved consider how the goal came with Sevilla winning a controversial throw in.

That said, our defenders have a responsibility and should be awake at all times.

Watch Sevilla’s equaliser below as David de Gea was beaten at the near post by Suso, formerly of Liverpool and AC Milan.