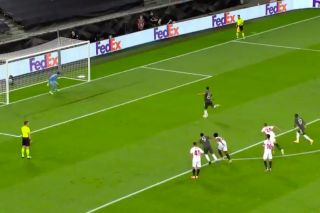 Bruno Fernandes has given Manchester United the perfect start in their Europa League semi-final against Sevilla in Cologne.

Fernandes’ penalty against FC Copenhagen ensured United’s progression through to the last four, and he was given the opportunity from the spot again after Marcus Rashford was felled in the box following a glorious chance.

The Portuguese Magnifico maintained his 100% penalty record with a nonchalant effort into the top corner beyond helpless Sevilla goalkeeper Yassine Bounou.

It was a wonderful penalty form the totemic playmaker and United can now settle in a tie of significant magnitude for Ole Gunnar Solskjaer.

See the penalty below, via BT Sport:

Man Utd's 22nd penalty of the season is dispatched with class 👌