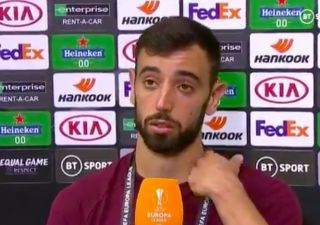 Tempers flared in the closing stages after Luuk De Jong scored from a fairly innocuous position, causing a tense exchange of word between Fernandes and Lindelof who was clearly at fault for the goal.

Fernandes and Lindelof were seen bellowing at each other in frustration, but the Portuguese playmaker played down the row in his post-match interview.

United’s goalscorer said that every player was ‘mad’ at the manner the goal was conceded, causing Ole Gunnar Solskjaer’s side to go out in their third semi-final of the season.

The Reds were the more dominant side throughout the game, which Fernandes reiterated at full-time.

But he was left to rue a series of glorious opportunities United had to take the lead in his second-half and expressed his exasperation at the profligate finishing that ultimately cost the Reds a chance of silverware.

See his post-match interview below, via BT Sport:

"We do a great game, create a lot of chances, but in football that is not enough.

"Their keeper did very well, but for the quality we have, we need to score."