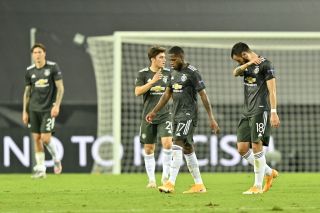 Manchester United have crashed out of yet another cup competition at the semi-final stage after they suffered a crushing 2-1 defeat to Spanish side Sevilla.

The Reds started the game on the front foot after Marcus Rashford went down in the area under a heavy challenge from Sevilla defender Diego Carlos which saw his side awarded with a penalty just 10 minutes in.

Midfielder Bruno Fernandes was given the task of converting the spot-kick which he did so in emphatic fashion. The Portuguese attacker smashed the dead ball home after perfectly executing his trademark ‘hip skip n jump’ technique.

Despite the quick start, the Reds found themselves level just 17 minutes later after former Liverpool man Suso latched onto the end of a whipped cross.

Disaster struck with just 10 minutes left of the game though, despite United utterly dominating the game, Sevilla substitute Luuk de Jong broke Red hearts after again latching onto a ball into the box to give his side what turned out to be game’s winner.

In light of United’s crushing defeat, we have assessed three things we learned and can take away from tonight’s game.

United’s lack of quality to come off the bench is becoming increasingly evident. The best sides in Europe can generally field two equally as good teams, United however, cannot.

The Reds severely lack squad depth which often leaves them out of their depth when looking to impact matches in the later stages.

In a week which saw manager Ole Gunnar Solskjaer issue a plea to the United board to spend, I think after tonight’s game his call will have to be answered.

Despite their individual qualities, Maguire and Lindelof are a terrible partnership

As painful as it is to admit, Harry Maguire and Victor Lindelof, try as they might, do not make a good centre-back partnership.

Both players are great defenders and both possess qualities unique to one other, but for for some reason, they severely lack chemistry on the pitch.

Far too often are both defenders unaware of what each other is or should be doing, their lack of awareness for their partnership duties became glaringly obvious this evening especially during Sevilla’s second goal which saw both centre-backs well out of position and if we’re being honest, both were in no man’s land.

Often, keeper David de Gea is left as the last man which could perhaps be a contributing factor in why his confidence appears to have diminished in recent times. Does the keeper have any faith in his back-line? – I would say not.

Despite enduring his best spell of form prior to a nasty back injury back in January, Rashford has failed to recapture this form after top-flight football resumed back in June.

The attacking wide-man has been a constant outlet for a front-three of Fernandes, Anthony Martial and teenage sensation Mason Greenwood, but has failed to be clinical when needed the most.

Rashford’s considerable dip in form is heaping unnecessary pressure on his front line partners and forcing Fernandes to take even more creative responsibility onto his shoulders.

If United are going to be a force next season it goes without saying the starting eleven cannot afford to have Rashford carry this dreadful run of performances into the new campaign.