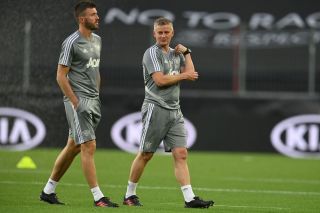 The Reds finished their Premier League campaign strongly by clinching third-place and now it’s time for the board to repay the manager’s efforts by signing better players for him to work with.

And Solskjaer believes the club still has plenty of work to do to compete with the likes of Liverpool and Manchester City.

Despite finishing third, we ended up being 15 points behind City and 33 points shy of Liverpool. That’s a lot of ground to make up and we won’t do make the right steps forward unless better players are brought in. The board cannot sit idle now when progress is so clear.

There’s another point worth noting that United haven’t won the league since 2013. It’s shameful that our owners are happy once Champions League football is secured, they’ve no interest in going an extra mile for silverware because success to them is money. Money only.

“It’s a race. You can see teams building. We’re always looking at the squad and player logistics,” Solskjaer said (via GOAL).

“It is definitely about quality — and it is going to cost money to get in players who are better than the ones we already have.

“We still have a way to go to get to that level of the teams at the top of the Premier League. They are too far ahead of us.

“We are still growing, getting better of course, but we are not the finished article. Nowhere near.”

It feels like the 16 days we’ve had of the transfer window have been spent trying to hammer Borussia Dortmund’s door down over Jadon Sancho.