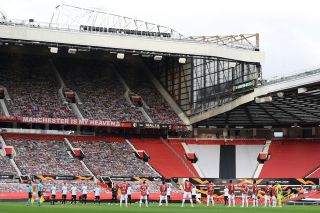 Manchester United are seemingly set to start the 2020/21 season with a clash against rivals Arsenal at Old Trafford.

The ‘leak’ comes from the Fantasy Premier League website, which you can see in the picture below, initially shared on Twitter by the football community who don’t miss a trick.

Of course, the fixtures are yet to be officially released, but this looks genuine.

The Reds will be hoping to mount a title challenge after finishing in third-place last term. Our only concern is the doubt over fans being able to attend games, which we’ll have updates on whenever there is something to report on.

Three points in our first fixture — we’ll say versus Arsenal until it is suggested otherwise — would put us on the right path and create a potential bumpy road for Mikel Arteta’s side. Arsenal are miles off the pace and we should be starting the season strongly.

The ‘leak’ suggests Liverpool will start their title defence away to West Ham, while Man City host Crystal Palace