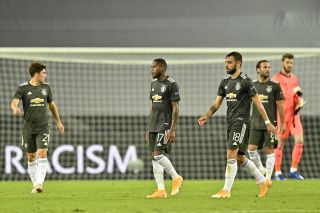 Manchester United’s season is over.

An unprecedented, protracted campaign ended at the hands of the opportunistic tournament specialists Sevilla who managed to do the one thing that United couldn’t. Take their chances.

United have been ruthless at times since the restart but for a third consecutive semi-final this season, they failed to deliver the vital cutting edge.

Ole Gunnar Solskjaer’s men can have no complaints either, after squandering countless opportunities in a tie they dominated for large periods.

The blitz on Yassine Bounou’s goal after the second-half couldn’t yield a single goal, as the Moroccan international put in a display akin to Karl-Johan Johnsson’s Herculean effort for FC Copenhagen just six days previous.

The attacking trident of Anthony Martial, Marcus Rashford and Mason Greenwood propelled the Reds to an unlikely top three finish in the Premier League, but could not seize their opportunity when a trophy was on the line.

Not too much blame can be attached on the trio after giving everything for the cause, but Solskjaer is forced into demanding too much of three players that are drained and unsupported by tenuous squad depth.

That is where Solskjaer now has to be backed by the board. United need a ready-made quality attacker and that can only be found by spending big in the transfer window.

Ed Woodward and Matt Judge must find a compromise with Borussia Dortmund for Jadon Sancho, and another clinical forward should also be on the agenda.

United’s profligate finishing was where they fell short, but the abysmal defending by all four defenders ultimately cost United the game.

Solskjaer’s fatigued defence surrendered to an innocuous ball into the box that should have been cut off by the spent Brandon Williams.

Harry Maguire and Victor Lindelof’s elementary defending allowed Luuk De Jong to sneak in at the back post ahead of a startled Aaron Wan-Bissaka and steal victory.

United require a proficient, experienced centre-back who can take control in these critical situations and help avoid such inexplicable errors.

The Reds are crestfallen this evening after relinquishing their third chance of silverware.

Solskjaer’s team’s areas of weaknesses have been exposed once again and the club now enter a seven-week period where they will show how seriously they back their manager to make the next step ahead of the new campaign.