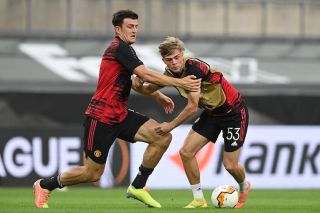 Manchester United and Sevilla are set to battle it out later this evening with a place in this year’s Europa League final up for grabs.

The Reds come into tonight’s crucial knockout game in fine form having won three of their last four games but will need to be at their awe-inspiring best if they’re to get past their solid Spanish opponents.

Five time competition record winners Sevilla put in a highly impressive performance in their quarter-final tie against Premier League side Wolverhampton Wanders which saw them cruise the game despite only winning 1-0 after a late header from Lucas Ocampos.

Reds manager Ole Gunnar Solskjaer will be keen to see his side put in a performance this evening which will see him move a step closer to replicating Jose Mourinho’s success of 2017 when he lifted the trophy with United.

Tonight’s victors will become the first side in this year’s final and will await to learn their final fate when Inter Milan take-on Shakhtar Donetsk tomorrow evening.

United fans have taken to social media earlier this afternoon to make their predictions ahead of the crucial semi-final later.

Stifle Banega. We do that we have a chance. Need to take our chances as we seem to rely of moments of magic these days. Our ball retention has to be better as they could seriously sap the energy out of us in the heat if they get a foothold in the game. See it going to Pens.

2-0 United. I think we will score early on in an open game which will play into our hands and then score a second later on sealing the tie.