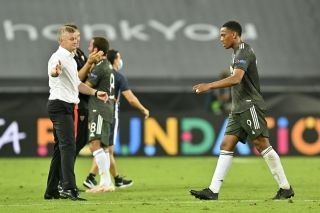 Agonising for Ole Gunnar Solskjaer and his team. Manchester United had plenty of chances but couldn’t put them away.

The result puts Sevilla in the Europa League final and gives them a chance to win the competition for a remarkable sixth time.

Poor defending at times and missed opportunities are the reasons why we haven’t made the final, but it didn’t help that referee Felix Brych was a complete tyrant in his approach to the game.

It spells the end of United’s 2020-21 campaign but next season there’s Champions League football to look forward to.

The board must ensure that Solskjaer has a stronger team next term to compete on all fronts. Tonight it was clear we lacked a prolific goalscorer.

However, I really don’t think United played poorly on the night – but they wasted opportunities and paid the price.

Check out how United fans reacted on Twitter at full-time.

I’m gutted but I’m not surprised! We got beaten by Sevilla in the Europa league! Man Utd should be competing for titles and the Champs league! We laughed at City last night for losing in quarter final of CL- think about that!! We’re miles off it! We’re consistently miles off it!

No excuses now for Edward Woodward and the #mufc board. Our season is over, we know where the weaknesses in this squad are. Go get some quality signings and maybe we can improve upon three semi-finals and a third-placed Premier League finish.

Losing 3 semi finals is a massive concern for me. Mentality is weak in the squad.

Lindelof🤦‍♂️ got to go and get another centre-back, or stick with Bailly. Not good enough I’m afraid.

Everyone is talking about Jadon Sancho, but we honestly need a fucking CB. Lindelof, Bailly & Maguire are simply unreliable. We need a proper proper defender.

Disappointing to lose but not too disappointed overall.

We know there’s a decent group of 10-14 players but need a couple for the first team and some strength in depth.

Think they gave it everything.

3 semis and 3rd is about right for this team. Very much a work in progress.

The players will now have a much needed break before returning for the 2020-21 Premier League season.

Solskjaer needs improvements in more than one area and I’d include our defence in that. Paul Scholes echoed that in his post-match overage on BT Sport.