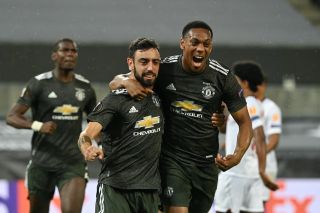 Manchester United and Sevilla cannot be separated at half-time in their decisive Europa League semi-final match-up as the sides go into the break all square at 1-1.

The first-half saw United presented with a glaring opportunity to take the lead from the spot when forward Marcus Rashford was fouled by the Sevilla defender Carlos inside the box.

Portuguese midfielder Bruno Fernandes stepped up and smashed the ball home in a quiet superb spot-kick, however, despite the Reds wonderful start it took their opponents just 17 minutes to pull the game level.

At the turn of the 29th minute ex-Liverpool attacker Suso finished off a great Sevilla move as he smashed the ball into the back of net leaving number-one David de Gea with no chance.

The game has been a thoroughly enjoyable spectacle so far with both sides clearly going it as the match has flowed end-to-end.

With a place in next Friday’s final up for grabs, United will be keen to come out of the tunnel and recommence the second-half as they started the first.

At the break, a selection of United fans have taken to their social media to express their thoughts as the first-half comes to a close.

Started great, some great football, shouldn’t have been their throw in, but thought both Aaron & Brandon got caught out for the goal!

Decision making needs to be better. Keep it simple

we are a bit unlucky not to be winning. have had by far better chances and a lot wrong with their goal. we keep creating chances and we will be fine

Amazing game. Two top teams fighting for thropies and giving it all. Love it.