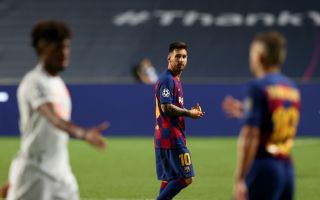 Retired footballer turned pundit Graeme Souness has made a big prediction that Lionel Messi could ‘easily’ end up at either Manchester club (Manchester United or Manchester City) after Barcelona crashed out of this year’s Champions League.

It wasn’t an ordinary knockout blow for the Catalan club because they were left utterly humiliated after suffering an 8-2 defeat to Bayern Munich. The Germans rubbed their noses in it.

Souness writes a column for The Times (£) and, in his latest piece, he states that the week ahead could be the ‘perfect’ time for United to make a move for Messi.

The Argentine’s future now seems uncertain but once Quique Setien is sacked — which seems very probable at the moment, as per ESPN — I’m sure Messi will have a say in who replaces him before quenching any doubt over his future.

Messi, 33, has one year left on his current deal and he is more aware than anyone that this Barcelona side requires a lot of work to reach previous heights.

Souness wrote the following in his column: “Lionel Messi looked like a man who has had enough of carrying that team.

“Without him they wouldn’t even be good enough to qualify for the Champions League.

“This would be the perfect week to put a bid in for the 33-year-old Argentinian and I could easily see him playing in Manchester — at either United or City.”

I wouldn’t buy into this because if United are struggling to do a deal for Borussia Dortmund’s Jadon Sancho, it will be 10x more difficult dealing with Barcelona over Messi.