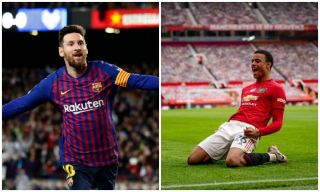 When Graeme Souness talks about a Manchester United player in a positive light, you should always remove your glasses and give them a quick clean. Try reading again.

Paul Pogba definitely gets the worst degree criticism from Souness, who, quite clearly, can’t stand the Frenchman.

But it is a nice surprise to see him rave about another United player, and compare him to arguably the greatest player of all-time.

In his column for The Times, Souness raved about Greenwood, who has 17 goals already this season which puts him Lebel with Wayne Rooney and George Best for the most goals scored by a young player in his first full season.

He will have his eye on a goal tonight in the Europa League semi-final against Sevilla.

“If you look at a lot of Messi’s goals, you see play developing and the goalkeeping getting set and then the next thing the ball’s in the back of the net and he has not moved because Messi takes it so early.

“I’m not saying Greenwood is in Messi’s class, it’s very early to call him, but he looks better than Martial and Rashford when it comes to that sixth sense and should get more goals than them over the course of his career.”

You hardly expected Souness to ramble on about more United positivity for the rest of his column, did you?

The former Liverpool midfielder and manager called out Anthony Martial’s inconsistency in his career so far, writing: “He has looked moody and disinterested at times. If that’s in his personality, it could come back.”

However, Martial has what looks like a permanent smile on his face ever since Bruno Fernandes’ January arrival, and I’m starting to feel really optimistic about his future at the club.

United are moving in the right direction under Ole Gunnar Solskjaer and you get the sense of belief from pundits that they feel we’ll be back at the top soon.