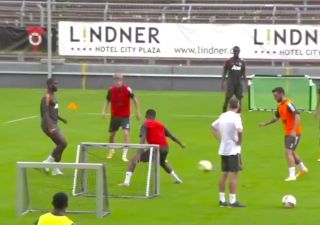 Ole Gunnar Solskjaer’s side are training in Cologne ahead of Sunday evening’s Europa League semi-final against Sevilla at Stadion Köln.

United have looked in high spirits ahead of the challenging clash with the La Liga side that defeated Wolves in the quarters.

Pogba and Fernandes have shown promising signs of an exciting midfield partnership since the restart and nonchalantly destroyed their teammates with a series of quick passes in a close-control training drill.

The pair are both expected to start against Sevilla with United two games away from their first piece of silverware under Solskjaer.

Take a look at the clip below, courtesy of the Sun via MUTV: